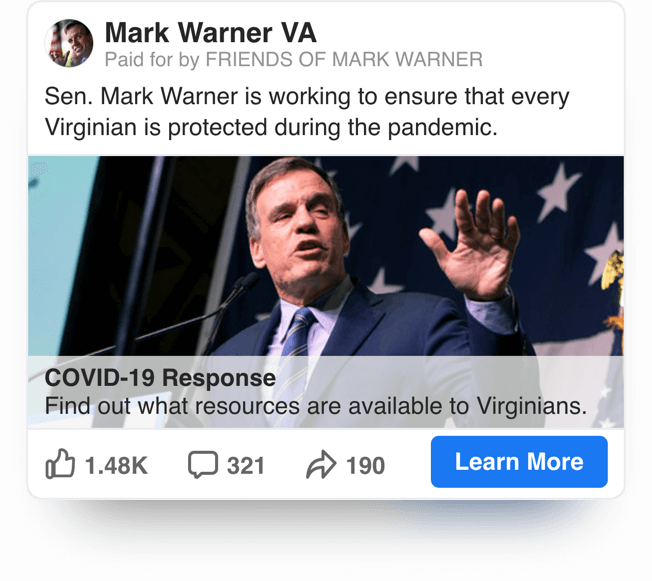 When boutique agency Big Lens heard about MediaMath & Spaceback’s partnership, they knew it was something they wanted to leverage for Senator Mark Warner’s re-election campaign. The Senator’s campaign had a strong presence on Facebook and Instagram, but their display creative was lacking. Big Lens was able to use Spaceback to instantly convert social media posts into production-ready creative to activate via T1.

What they didn’t know was that Spaceback creative would go on to perform over 50% better than their standard creative. Spaceback’s Social Display units leverage a familiar look and feel to combat banner blindness and drive superior performance and engagement rates.

MediaMath and Spaceback, the industry leaders in social display, have partnered to give brands the fastest and easiest way to leverage their social posts via programmatic. This allows brands participating in the Facebook boycott to quickly reallocate budget to programmatic channels while taking advantage of the high-quality experiences they have developed for social. Not only does this result in faster activations, but Spaceback creatives also deliver over 50% better performance than traditional display ads. And the best part is that Spaceback creative can be executed in any programmatic buy, meaning buyers don't have to sacrifice the scale or transparency they are accustomed to when using T1.